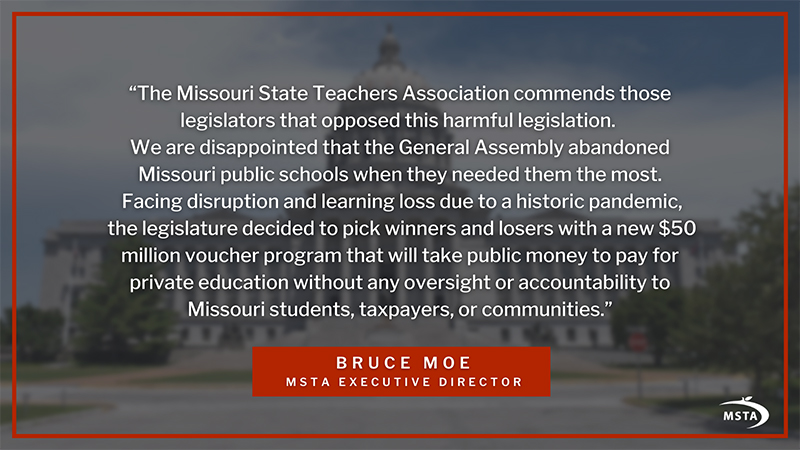 The Senate voted to approve and send to the governor HB349 (Christofanelli) that would allow any taxpayer who makes a qualifying contribution to the Missouri Empowerment Scholarship Accounts Program to claim a tax credit equal to 50% of the total contribution. The tax credit voucher program would begin at $50 million per year and could grow up to $75 million with no oversight by the Missouri General Assembly.

This new voucher program would allow for the creation of nonprofit organizations that would be allowed to defer state tax dollars that would normally go to the education of all students, steering resources away from the classroom toward bureaucratic administration.

HB349 allows for the vouchers to be used for a number of services, including private school tuition, textbooks, tutoring services and summer education programs with no accountability or oversight from the Missouri Department of Elementary and Secondary Education. This new program would be overseen by the State Treasurer who is given very few tools to ensure that the programs are contributing to the success of Missouri students.

This legislation would impact every district in the state by limiting the amount of state revenue available to fund public education that serves all students across the state. Public tax dollars should be used to support all students’ needs including mental health access, classroom supports, and highly qualified teachers. The bill does not allow for any accountability for the programs that would be using state tax dollars for Missouri students. In fact, the bill prohibits the state from having any oversight over the entities that accept vouchers from the students in the program.

The Missouri State Teachers Association commends those legislators that opposed this harmful legislation. We are disappointed that the General Assembly abandoned Missouri public schools when they needed them the most. Facing disruption and learning loss due to a historic pandemic, the legislature decided to pick winners and losers with a new $50 million voucher program that will take public money to pay for private education without any oversight or accountably to Missouri students, taxpayers, or communities.

The bill will now go to Governor Parson for his consideration. MSTA will advocate for the governor to veto this harmful legislation.

Budget negotiators worked for nearly eight hours on Wednesday to give their approval to the 13 budget bills that make up the $35 billion state budget. Both the House and Senate gave their approval on Friday.

The longest discussion during the conference committee meeting centered around $2 million for “Public School Improvement.” This was included in the House version of the budget and was supported by a nonprofit called the Opportunity Trust. The Opportunity Trust is a pro-charter school organization that has been active in St. Louis Public Schools as well as the Normandy School District. In Normandy, the organization was instrumental in hiring a superintendent that lacks proper certification in Missouri and was a founding board member for a charter school that was set to open in Normandy. In response to community member concerns the State Board of Education has appointed two new members to the Normandy Schools Collaborative’s executive board and required the board to hold new elections for officers on the board. After many members of the conference committee expressed their concern with the appropriation, the money ultimately remained in the budget.

The budget now goes to Governor Parson where he has the ability to line-item veto specific appropriations or give approval to the entire budget.

The House Elementary and Secondary Education Committee held their final meeting of the legislative session and voted out SB323 (May) with several provisions added to the underlying bill. The original bill passed the  Senate with language that would allow a school district to offer an elective social studies unit on the Hebrew Scriptures, the Old Testament of the Bible, or the New Testament of the Bible. The course would include the contents, history, literary style and structure, and influences on society. No requirement shall be made by the district on the text translation students must use. The bill requires that any course offered shall follow applicable laws maintaining religious neutrality, and shall not endorse, favor, promote, or show hostility to any particular religion, nonreligious faith, or religious perspective. In committee, the bill was amended to create a new committee substitute that includes bills that were also put in the other omnibus bill SB152 (Hoskins).

The House Committee Substitute for SB323 (May) includes language from the following bills:

This bill also includes language that was added to several bills late in the process called “Extended Learning Opportunities.” This language has not been included in any stand-alone bill and has not had a hearing in either the House or the Senate. This proposed program would allow DESE to grant high school credit towards graduation for students participating in work, volunteering, or programs outside of school.

Similar to other bills at the end of the legislative session, HB320 (Fitzwater) was voted out of the Senate Education Committee and amended by the committee to include a large number of items. The underlying bill modifies the definition of “computer science course” by including any elementary, middle, or high school course that embeds computer science content within other subjects.

The bill requires coursework and instruction in computer science and computational thinking in public and charter high schools, middle schools, and elementary schools. Courses and instruction offered under the bill must meet certain standards established by the State Board of Education and the Department of Elementary and Secondary Education. The Department is required to appoint a computer science advisor to implement these provisions of the act. Beginning July 1, 2022, computer science courses successfully completed and counted toward state graduation requirements will be equivalent to one science or practical arts credit for the purpose of satisfying admission requirements at any public institution of higher education in the state.

The language that was included in committee incorporates a number of bills or language that was included in bills that have not yet passed this session. The bill would now include provisions from SB33 and SB34 (Arthur) that establishes the Show Me Success Diploma Program as an alternative pathway to graduation for high school students. Students may earn the show me success diploma beginning at the end of a student’s tenth grade year. The bill would also establish the Competency-Based Education Grant Program. A task force would be created to study and develop competency-based education programs in public schools.

Language similar to SB95 (Onder) would make changes to the Missouri Course Access and Virtual School Program. It modifies the definition of “full-time equivalent student” for purposes of the Missouri Course Access and Virtual School Program by including all students served by the program who are enrolled, rather than who have completed, the instructional equivalent of six credits per term. Such students shall not be required to be present at any specific physical location for any ongoing instructional activity. A full-time virtual school program serving full time equivalent students must participate in the statewide assessment system, with the results to be attributed to the virtual school program as an attendance center, rather than the local educational authority. DESE, rather than each school district or charter school, would adopt a policy that delineates the process by which a student not enrolled in a full-time virtual program may enroll in courses provided by the Missouri Course Access and Virtual School Program. This language repeals the provision requiring a student to receive approval from his or her school district. If the school district or charter school believes a student’s request to enroll in a virtual program is not in the best educational interest of the student, the reason shall be provided in writing to the student’s parent or guardian, who will have final decision-making authority. The costs associated with such virtual courses to be paid by the school district or charter school directly on a pro rata basis each semester, rather than monthly, based on a student’s completion of assignments and assessments.

Other new language would establish the School Accountability Board. Each member will serve at the pleasure of the commissioner or officer who appointed the member. The Board will advise the State Board of Education and DESE on matters pertaining to the development and implementation of the state’s school improvement program.

The remaining sections of the bill relate to language that aligns Missouri’s 529 program with federal rules and regulations, allows intercollegiate athletes to earn compensation from the use of their name, image, likeness rights, or athletic reputation and not affect the student’s scholarship status. The bill further includes a removal of tuition caps for Missouri higher education institutions and changes to sheltered workshops.

The Senate Education Committee removed language from the House version that would have allowed registered voters to file a petition with the school board to add specified agenda items to any monthly school board meeting.

SB323 (May) allows school districts to offer elective social studies courses on the Hebrew Scriptures and the New Testament.

SB323 (May) see earlier story. Voted do pass with substitute.

SB116 (Bernskoetter) authorizes the Gasconade R-II school district, which crosses county boundaries, to use the county that yields the highest dollar value modifier under the school foundation formula.

Set your region by specifying your Missouri school district. This does not affect your actual region associated with your MSTA membership. This only sets your region while you browse the MSTA website.